Don’t get me wrong. I have the utmost respect for my new neuropsych. They have great intentions, they are smart — brilliant, really — and they are driven and determined to help people who are in need of assistance. I’m lucky to have been connected with them.

Here’s the thing, though — they’ve got 30 years less experience than my former neuropsych. And that really shows. It shows in their pacing, their approach, their focus. It’s my understanding they’ve been working in clinical settings that have been largely academic, for most of their career, so far, and they’re relatively new to individual clinical practice.

My former neuropsych had 40+ years experience in clinical and rehab settings. I believe they once ran a rehab center, in fact. Or two or three. Anyway, they had decades of high-level experience in rehabbing brain injury survivors, and I benefited from that for the past 8 years or so.

Now I’m working with a “spring chicken” — it’s not the most professionally respectful term, I know, but that’s how they seem to me. They’re 15 years my junior, which just amazes me… And it shows.

Good God, do they have a lot of energy. It’s that kinetic, over-the-top-can-do kind of enthusiasm that people have before they hit a lot of walls, personally and professionally. They have an exuberance and optimism that I used to have, too.

Then I got hurt. And life happened. And a lot of crap came down the pike for me. And now I am where I am now — with a pretty big deficit where all my own exuberance and optimism used to be.

Although… maybe that’s not entirely true. Maybe I still do have that energy — just not to the same willy-nilly degree that I used to. Or maybe I do, and I just need to bring it back. Access it again. Play off the energy of this new neuropsych, who is in some ways like a breath of fresh air, compared to the dour pessimism and personal cynicism that sometimes “leaked through” with my old neuropsych.

Oh, another thing just occurred to me — I’m working around a lot of people who are my age or older. And that’s affecting my perspective, too. I work in an older environment, very established and staid, and compared to my peers, I feel like a spring chicken, myself.

So, I’m balancing out the energy of youth, as well as the balance of age. My new neuropsych is clearly still learning about things like how to pace their speaking, and how to give me space to sort things out. They move too fast for me, at times, and it’s frustrating.

But it’s good to get pushed. Again. After years of being accommodated. I need to be pushed. Quit feeling sorry for myself. Really work on my reaction time. And get back to my memory exercises. See above.

Here, let’s try to draw what I had at the start: 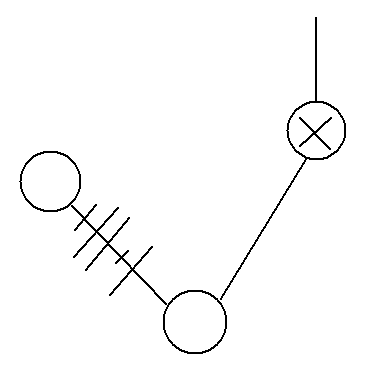 Not bad – I just had the proportions off a little bit, but all the elements are there.  The right circle with the “x” is higher than it should be, and the vertical line off it is longer than the original. Also, the hatches on the left line are longer than they should be.

I’ll have to try again later today, and see how it goes.

Gotta get back to doing my exercises. Get myself going. And continue to make progress. Keep moving forward. Keep at it – give myself time to rest – but keep at it.

2 thoughts on “Training my new neuropsych – and myself”