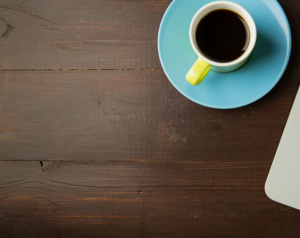 I’ve been “off” coffee for a couple of years now.

Well, not entirely off, but severely curtailed. I went from drinking 3-4 cups a day (starting with two big cups in the morning) to barely one cup a day.

I’d start with 1/3 cup of really strong coffee, and then I’d have another small cup of strong coffee in the afternoon — preferably no later than 2 p.m., because if I drank it later, it would throw off my sleep schedule, and then I couldn’t get to sleep.

And in between, I’d eat chocolate to keep myself going. Because… chocolate. Caffeine. Sugar. Other tasty anti-oxidants in there to pump up my flagging energy.

But I had to give it up. Chocolate. Especially coffee.

What would make me do such a thing as give up my regular flow of dark and lovely caffeine? Well, all those cups were contributing to migraines — constant headaches that rarely went away. I had a non-stop headache, it seemed, for years. And I didn’t even realize it could be any other way. I figured it was just how my life was going to be, for now and evermore.

When I was told by a neurologist that caffeine (which includes chocolate) can actually trigger migraines, it amazed me. Here, I’d thought they actually reduced headaches. That’s what I’d been told, anyway. But the science is there — with some kinds of migraines, caffeine can actually make things worse. And discontinuing can help.

That’s what happened with me.

But lately, I’ve been reintroducing a little more caffeine (and occasional chocolate) into my days, without too much adverse effect. I’ve been having slight headaches, but nowhere near the intense ones that used to be constant with me. And since I notice them more, now, than when they were non-stop, those headaches are a good signpost for when (and how) I need to make different choices and do things differently.

Just the other day, someone had left some candy on the counter near the coffee maker at work. It was a kind I used to really love. Couldn’t get enough of it. I was able to walk past both the coffee maker and the candy all morning, but in the afternoon, as I was making my 1:30 p.m. 1/2 cup of espresso, I nabbed a few pieces and ate them slowly.

Sweet. On so many levels.

And then I drank my 1/2 cup of coffee. And I had another 1/2 cup a few hours later. No immediate headache. At least, not that I could tell.

I’ve been drinking a little more coffee, nowadays… and while I have developed low-level headaches (I have one right now), they’re not so awful that I can’t function. I’m keeping an eye on it, but so far, so good.

And the other good news is that with my regular daily exercise and eating a really healthy diet, I have been able to get to sleep, even if I have a little caffeine after 2 p.m. Sometimes I’ll have some at 4:00, and I’ll still be able to get to sleep. I think it’s because I’m really actively living my life. I’m “all in”, each and every day, and I also usually finish up the day with stretching and relaxing before I go to sleep.

That last bit — stretching my back and legs before I tuck in for the night — has actually done me a world of good. If I don’t stretch, I often find myself waking up at 3 a.m. in pain, and I can’t get back to sleep.

So, stretching before sleep is really helpful. As is relaxing before I turn off the light. Just consciously relaxing makes a huge difference. Until I learned how to do it (it didn’t come naturally), life was a whole lot harder than it needed to be.

Well, it’s Friday, and that’s a good thing. I’ve got a full weekend ahead of me, and I’m working from home today to get myself geared up. Relax a little bit. Tie up loose ends from the week. And get ready for what’s next.

3 thoughts on “Adding back coffee – a little at a time.”