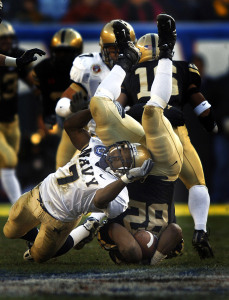 To be honest, I haven’t been following the NFL litigation that closely. It all gets to be too much to keep track of. But this is a great summary of what’s going on, and how it may impact the NFL, as well as the rest of the country.

The Year of Football Lawsuits just took its next and possibly biggest step of all. A New York Court has sided with the NFL’s Insurance Companies and ordered the league to do what noone has managed to do before.

Some background for those unaware. Not only has the National Football League fought admitting anything and only rushed to settle the Ex-Players Lawsuit when it appeared it would have to open its drawers, files, closets, secret compartments and anyplace else they have documents on what it knew and when it knew it about the risks of Concussions for Players, it never wanted to pay for anything.

In the end, it boils down to this, for me (as well as the article’s author):

Maybe there’s a principle at stake here. But probably not. It’s probably all about the Ex-Players Settlement Money.

UNLESS…and it’s the biggest unless in the history of Sports in the United States.

Unless those Insurance Companies are also looking at all of their other Customers who are being sued, will continue to be sued and will be sued alot more for alot more money over Football and Concussions/CTE. Customers like Cities, States, Universities, Pop Warner and a whole lot of others. Maybe even including Television Networks and Football Sponsors.

If those Insurance Companies are thinking about them, they might have only one thing in mind right now.

Finding out if and how badly the NFL, its Owners, Commissioners, Executives, Lawyers, Doctors, Public Relations Firms and anyone else around them screwed the Country.

I had to read that line a couple of times, to make sure it said what I thought it did —

… how badly the NFL, its Owners, Commissioners, Executives, Lawyers, Doctors, Public Relations Firms and anyone else around them screwed the Country.

Not just the players, not just their families (although that’s reason enough to go ballistic on the NFL), but the Country. If the NFL opens its books and shows its hand — and we actually let it sink in, what a fraud and a disgracefully dangerous, soul-sucking, life-killing scam the NFL has perpetrated on this country, all for the sake of “entertainment” — some very rich people are going to have some explaining to do.

Think about it — the marketing of the NFL, their propagation of playing practices and enthusiasm for football, their large-scale investment in cultural shifts towards idealizing the game they make billions from… as well as the whole infrastructure of pee-wee football –> high school –> college ball –> NFL (which has been described as an “underground railroad” for poor African-American kids to break the cycle of poverty)… we’ve all been marinating in football fever for as long as I’ve been alive. The started the Super Bowl around the time I was born, and I grew up — like so many others — really steeped in that head-banging excitement, which was never, ever questioned or challenged.

Football was never considered as dangerous as it truly is — and that’s for a very good reason. The folks who stand to gain ma$$ive amount$ of money have paid well to keep that information out of the public eye and discussion.

But now it’s coming around, and we’re going to have to take a look at just what the cultural thought-control by these ve$ted interests hath wrought. And yes, they are going to have some explaining to do.

Between the Panama Papers and these lawsuits, as well as the anti-elite dust storms kicked up in this election year, it seems to be a theme.

I just wish it didn’t cost us so much, to get a clue.

You can read the rest of the excellent article here: NFL Concussion Lawsuits Get Really Real Now | Brandi on Steroids

In my travels, I come across a lot of people with a lot of different skills and abilities, difficulties and challenges. Every now and then, I’ll come across someone who has experienced a brain injury, and they retained a lawyer to represent them and recoup damages. Unfortunately, I have rarely come across anyone who has actually won their case, or gotten as much compensation as they felt/told they were entitled to.

Having worked with lawyers a lot in the past, I can say that I have rarely seen clear-cut cases which turned out the way people expected/hoped them to. And I have seldom seen results which truly matched the circumstances. Either the lawyer had to work a lot harder and longer than they expected — and their fees went way up. Or the other side had a great lawyer, too, and they prevailed in at least slashing the damages to what was — after all was said and done — a pittance.

The problem is/was, that one of the main components of the cases I’ve heard about was often the “injury” or “damage” piece of the story. The damages had to be justified by the degree of the damage done. So, in order for the case to proceed, the injured party had to live, breathe, eat, sleep their injury. And they had to present plausible evidence that they were severely harmed enough to justify a sizeable amount.

And in the meantime, valuable time and recovery were lost, in the initial weeks and months — sometimes years — that could have been used to get the victim back on their feet and take them from being a victim to a survivor. They lost critical windows of time in which they could have be rehabbing themself — they had to maintain the appearance of damage, until the lawyers were done with their part of the business. Which always took much longer than expected.

Or (almost worse), the person decided that they couldn’t wait for the litigation to be concluded before they started rehabbing themself, they got help from qualified professionals, and they made good progress. But by the time they got to trial, they were well enough restored to what looked like full functionality, that nobody would believe that they had ever had problems, and the court didn’t think it warranted damages being awarded.

I have huge issues with litigation as a way to right the wrongs of the world. It’s often demeaning and dismissive to everyone except the attorneys and court, and it’s expensive and rarely produces the results the victims anticipate. Even defending yourself against an accusation with the help of a lawyer can be an exercise in abject humiliation — no matter how innocent, justified and/or exonerated you are. It’s expensive. Lawyers bill by the hour. And you never know exactly how things are going to turn out.

Losing all the time that a court case takes to your recovery can be a terrible blow. And let’s not even discuss the blow to your dignity. Litigation always takes longer than expected. And it is more expensive and more taxing on the parties involved, than anyone believes it will be at the inception. And in that prolonged waiting period, when it’s critical that the victim obviously be victimized, valuable time and opportunity to heal and recover are lost.

Now, I’m not saying that the results/symptoms of tbi from a car accident or other mishap can eventually be addressed by rehab. I’m not saying that healing isn’t possible on down the line. I firmly believe that it can. I’m living proof that you can recover and get back on your feet, even years on down the line. The problem is, people who have been injured can end up sacrificing not only their health and well being, but their employment, their savings, their families, their relationships… because it’s incumbent upon them to present plausible evidence that damage has been done to them as a result of their accident.

And while the attorneys are drafting and filing their motions and briefs, valuable time and opportunity to get back what was lost, to cultivate necessary relationships, to readjust to your new world… slips away. And in the end, you can sit there in court being told, “Well, you don’t look that bad off to me!”

Now, I don’t for a minute think that this MUST be the case all across the board for every TBI case in the book. But at times, “going the attorney route” is not the way to go. And anyone who’s seriously considering it needs to carefully weigh the pros and cons of appearing injured and getting on with their life.

For if you wait and delay your recovery until after your case has settled, you may end up losing even more than you originally did. And all the money in the world won’t be able to replace at least some of what you’ve lost, because your lawyer told you that it will be in your favor if you look the part of an injured party.

Now, admittedly, I’m not a definitive subject matter expert on this subject. I’ve never been embroiled in a personal injury case over my tbi’s. But I have worked with a lot of lawyers, and I have seen how the court system works — very, very slowly. My recommendation to anyone seeking legal assistance to recoup damages after a head injury is to only get into it if you can afford to live without your whole self for as long as it takes to settle the case. No lawyer is going to tell you they’re incompetent and can’t bring the bacon home. They may reset your expectations along the line, but too often I’ve seen that reset happen long after everyone has passed the point of no return, and the only thing anyone can do is press on… and hope for the best.