I just read about the WBUR Poll: For Head Injuries, Football Fans Support Regulation, But Haven’t Changed Viewing Habits, and it got me thinking. I’m a big football fan. Even though I don’t watch every single game, I still love the sport. I also love to watch boxing and MMA.

Even though I know what it’s doing to the contestants — potentially causing brain injuries that will screw them up, sooner or later — I still love to watch the sports.

There’s something about seeing people wade into a fight and then come out on the other side (victorious or not) that’s very cathartic for me.

I think that’s because it reminds me of my life. I feel, on any given day, like I’m wading into a fracas of some kind. Either it’s work, or it’s just the everyday occurrences, or it’s dealing with the slings and arrows of the world. But whatever the nature of it, I feel like I’m getting beaten up… like another “team” is gunning for me… and like the players and fighters I love to watch, I have to keep my act together and keep going, till the end of “regulation play”.

I think that I’m not alone in this. A lot of people I know feel constantly attacked by life. We know we’re gonna get roughed up. That’s a given. We know it’s gonna hurt. We know we’re going to get pushed and pulled and trampled in the process, but we have to keep going.

And like those players, we take a calculated risk, every time we engage with life. We know the odds may be stacked against us, but we still keep at it. We stay in the game. And like so many of those players and fighters, even when we should probably sit out to let our brains recover, we head right back in there, as soon as we can. Because that’s the only way we know how to be, how to act, how to get along in life.

Personally, I cringe, when I think what’s being done to the “heroes” on the field and in the ring. I know what’s being done to their brains. But life is rough. It’s tough. It beats you down and knocks the stuffing out of you, time and time again. Football players and fighters are like our proxies. We fight to live, they live to fight.

And just about everybody can relate to that. 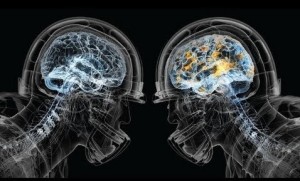 TBI is real for folks who play collision sports. Call it “concussion” or “mild” TBI or whatever else you will. Call it “character building” and “just part of life”.  But brain trauma goes hand-in-hand with slamming your body into other players on a regular basis.

Helmets will not keep brains from slamming against the insides of skulls. They literally can’t.

Coaches and parents need to get real about this, and understand the conditions they are helping to create.

Truly, I do not understand the rationale behind keeping kids playing collision sports — whether they’re young OR older. Helmets give you a false sense of security — which actually makes the situation worse, because a concussed brain can feel like a great brain. I know from many personal experiences, when I hit my head hard enough to alter my consciousness, after an instant of feeling like the lights went dim, when “the lights” came back up, I felt fantastic. Like I was superhuman. I’m not the only one.

As Riki Ellison, a former teammate of Junior Seau who like Seau played middle linebacker at USC and in the NFL, put it:

The fact is that when you receive what I would refer to as a partial but playable concussion, there is a unique feeling of being high, of floating, of being numb to pain and unaware of other distractions. This produces a happy state that translates to a belief of invincibility and a superman complex. In some ways, it acts just like a drug. You become addicted to that feeling and want more of it. And when you get another hit, it feels even better. (read more here)

And as long as kids are wearing helmets, and parents and coaches are thinking that they’re safer because of it, we’re just creating more opportunity for kids to injure themselves — in the short and long term.

I’ve been accused of attacking football. Not really. What I’m guilty of attacking is our willful ignorance about what role concussion plays in our youth sports… and how that affects the well-being and futures of kids who are “safer” wearing the latest headgear.

It’s one thing to not know about the dangers. But when people tell you, plain as day, and you refuse to take note — or do something about it — well, that’s something else, entirely.

And that goes for all collision sports where headgear is supposed to protect the players.